Cal wanted to spank Neil suspended but Neil was so happy with the idea, so he thought about it for a while and then came up with something he would like – OK Cal can spank me BUT I want to spank him as well in the same way. Cal agreed reluctantly and the two guys set the day up. Cal goes first, suspending Neil and then warming him up with a some hand spanking and removing his underwear, Cal then goes for ping pong bat followed by the paddle and then the strap and finally the cane. A good selection which Cal lays on well. Then it is Neils turn and he has a twinkle in his eye as he fixes the restraints to Cal and starts the same way with a few well laid hand strokes. Neil works his way through the section of items – ping pong bat, strap and paddle ending on the cane – looks like Cal has met his match here and even though Neil has a super little ass that colours up well he does not spare Cal at all. A super long clip – which is available in HD and SD – with two very hot guys and two very hot butts at the end. 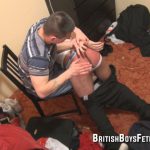 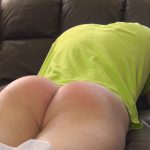