After the events when Terry was in the shower and Cal needed it badly you would have thought that he would know that a mans shower time is not to be disturbed. But having just woken up and in dire need he starts to knock on the door and hassle Cal, never a good move at the best of times. But as Cal mid way through his morning schedule of shower, shave and jerk Terrys constant interruptions are a real annoyance. In the end Cal bursts through the door and grabs terry by the ear and shoves him up the stairs – ignoring the fact that he has a need for the facilities. Into the bedroom and no messing around straight OTK and a few hard swats to start off. Terry is protesting and struggling but cal does not stop and soon the shorts are down and then the tight fitting underwear as well. Terry smooth little bum is going a good colour and no matter how he struggles Cal keeps on, but not stopping here cal produces the bat and starts to use that as well. The spin between swats changing the sides of the paddle is nice to see – bats have a hard and soft side BTW. The lesson is taught and terry flees from the room leaving Cal sat there wondering if his exertions mean he needs another shower. 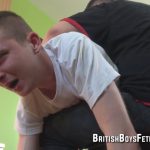