PREVIEW VIDEO
Become a member now to stream or download the full video!
JOIN BBFC!
INSTANT ACCESS TO ALL THE VIDEOS WE HAVE EVER PUBLISHED!
Posted February 9, 2019
Ricky Deals with leon2019-02-092019-02-12https://britishboysfetishclub.com/wp-content/uploads/website-logo2.pngBritish Boys Fetish Clubhttps://britishboysfetishclub.com/wp-content/uploads/leon090219hd.jpg200px200px

Ricky has had a hard day at work and is in no mood for playing around. So when he asks for a coffee and Leon makes it with salt instead of sugar he blows his top. He gives the laughing Leon a spanking OTK that should be a lesson learned the hard way for any lad. Ricky has a heavy hand and really lays it Leons butt. At the end he stands in front of Leon and grabs his junk, lifting him onto tip toe, and warns him not to play around anymore, then Ricky goes for a quick bath. Leon left alone rubbing his butt spies a bar of chocolate that Ricky has and decides to play another prank. He goes to the kitchen and holds it over a boiling kettle to melt it. He then replaces and sits down looking as innocent as he can. Ricky comes in after his wash and sits down to relax and have a little chocolate. He is furious when he sees it is melted and he once again lays into Leon ass giving a really hard spanking. But this is a bit much for Ricky and Leon also finds himself with a mouth full of Rickys dick as he is spanked. Ricky decides what will calm Leon down is a good seeing to, so he leaves the room to put on a condom. Leon looks quite unsuspecting when he returns but soon finds out that Ricky is not to be messed with. Taking Leon from behind he spanks him hard as he thrusts into the lads butt. In the end Ricky sits on Leon and blows a load onto the now subdued lad. Ricky is just delivering his final warning to Leon when the two are caught naked in the salon. The evidence is there and they are both guilty. Made to kneel on the couch they both get a good paddling. Rickys butt is soon a nice red like Leons as the paddle falls on both lads. Both are grounded and order out the room. Not a good day for Ricky or Leon. 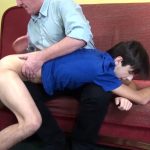 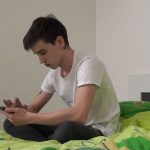