Philip called round the other day. He has been away at sport camp and wanted to catch up with things. He grabbed a shower before anything else, he usually runs everywhere so it is a usual thing for him to do. But he left the bathroom in a mess and instead of getting a warm welcome back he gets a paddling. Literally thrown on the couch the towel is pulled away, a shocked looking Philip knows whats next. The paddle whacks down on his butt again and again causing him to wriggle a round a little. He looks lean and slim after the weeks at sport camp and his butt seems to be extra muscular in this clip. The look on his face says that he has not forgotten how much the paddles really stings. The wriggling round while laying down is a bit dangerous for him, knowing his priapic reaction to being spanked and sure enough before long he is visibly hard and then dumping a load. Fortunately its on the towel and not the couch. When the paddling ends and he stands up it is spotted that he has made a mess and he gets another whack on the rear as he is chased out the room to start cleaning the bathroom and doing the laundry. Welcome back Philip. 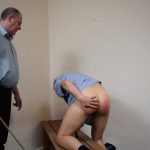 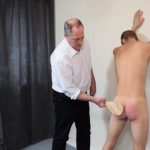