This clip is something really special from Philip, he shows just how out of control he gets during a spanking. Philip is not known as a hard working student and even when he is set tasks he rarely finishes them on time. So when he is found not working again there is no other option than to get him OTK and wake him up. A good warm up on the trousers and the underwear before his bare butt gets what he needs. As you would expect Philip gets excited and in no time at all he shoots his all over the floor. Once this is seen he has to stand at the desk and bend over and get a set with the cane. The cane has two effects on him, one is a great striped ass and the other is that he is excited again. As the cane stroke are laid on Philip cums a second time, this time on the desk. This is spotted and he gets some more strokes of the cane. A final repremand and a stroke and he stands up. The cane is whacked down on the table and Philip is shouted at and bingo once again he is shooting another load, thats three times in one spanking and thats just how much Philips looses control in these situations. Has to be Philips best film so far 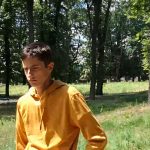 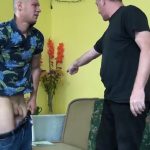