Leon has had a shower and left the bathroom in a mess, he has done this before so should know better. He is called in wearing only blue boxers and spanked in the wheelbarrow position. He really does not like this position and the look on his face says it all. At the end of the spanking Leon is told to go and clean the bathroom. But it appears he did not do as he was told and other than change his underwear he has done nothing at all. So its back into the wheelbarrow for a reminded spanking. This time after a few swats on the underwear he has to take them off and get a bare ass spanking. Leon Looks really uncomfortable and unhappy and he said after that he really does not like the humiliation of this position. 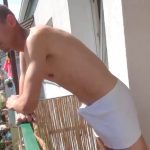 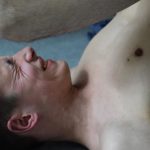