Half way through shooting a clip with Kel at the sauna in the locker room and two guys burst in on the scene. The door was supposed to be locked and a sign outside saying the place was closed for the day. Being a man on a short fuse at the best of times the whole thing descends into a shouting match in seconds. The shoot is called off and the dispute is settled. The two lads having seen whats going on think they are man enough to take a spanking for hard cash – a deal is struck and the shoot takes a new turn. The first lad, Vic, is not so tough and after an OTK he is flagging and a few strokes of the strap are enough for him to call it a day. Rod, the second lad is next OTK, this he takes well. Then the strap which starts to make him moan and struggle. Finally the paddle and this does the trick, his butt is a picture and his cries music to the ears. The final fast flurry of swats has him on the floor. he is helped up and paid off, with the offer of retuning if he wants to. This is not a scripted clip – what you see is what we shot – lights and cameras are in the shots – the language is strong and the spanking hard as I was in a foul mood at having these two burst in. They said yes to spanking for cash – one took it, one failed. This is as real as it gets…just guys straight in off the street and some very raw shots 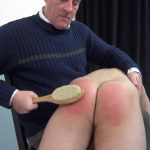 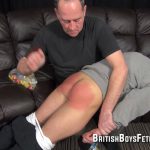