As you see Jimmy is a lazy brat, his room is a bombsite. Craig has decided to handle this in a different way this time. he wakes Jimmy and tells him to shower and report to the salon as soon as he can. Jimmy knows he is in for it so he is out of bed in the shower quite quickly. Of course being a naughty guy he takes longer than he should in the shower washing the same part over and over, a knock on the door from Craig makes him hurry up. He leaves the shower and wanders into the salon with a really surly attitude and Craig is there waiting. OTK he goes and gets some hard swats on the towel he is wearing, a wet towel magnifies each swat and Jimmy’s face shows the surprise as he thought it would protect him a little. Then he gets a bare ass spanking making him squirm and his legs kick. As a final step he is bent over the desk and Craig gives him some tasty swats with the bat. Looks like it is a lesson well taught but is it one learned I wonder? 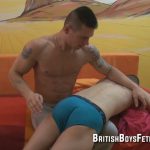 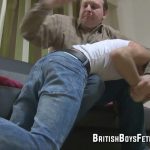