Starting with a slow timed run Andrew has to do some squats as punishment but his cheeky smile says that he is not phased by it. Craig on seeing this takes the lad to the nearest tree and stands him against it and soundly spanks his ass on his shorts. Craig gets the lad moving asgain and the two of them continue the run. The next pause is a chance for Andrew to do some press ups but he struggles and no way is Craig going to accept slow and strained press ups so he grabs Andrew by the ear and takes him over to a fallen tree and gets him OTK, first on the shorts and then on the bare ass. Andrews red bum is a glorious contrast to the sunny days and greenery in the forest. Once spanked and hoping that he has learned the lesson Craig sets off again at a jog with Andrew following on. The next stop and Andrew is told to do curls and is faking being exhausted, given away by his cheeky smile. This time Craig sends him off to collect some nettles which Andrew is not happy about as he knows whats next. Once Craig has the nettles Andrew is lent up against a tree and his shorts and underwear are pulled down and Craig takes the first of many strokes with the nettles, Andrew has to reach down and hold his cock and balls as he has picked the longest nettles and the end of it is whipping round and stinging him there, a great double punishment. The nettles really sting and the pause now and then just to rub them across the lads ass make the effect even better. Standing there in in the sun rubbing his tingling butt Andrew has to dress and head off as Craig wants to get back to the gym. 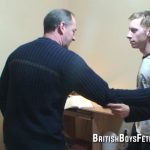 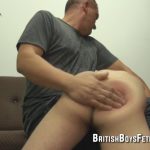