On his first day with us he was given the simple task of washing up the coffee things before filming but decided it was easier to play with his phone instead, not a wise thing to do on your first day with us. Confronted and looking sheepish he now has to face the music a little earlier than he planned to. Over the Knee he goes and finds himself getting a spanking on the trackies. Of course these have to go and its not long before he is told to drop them. His choice in underwear is good and this small guy now shows off his pert little butt. The delightful wobble at every swat says that the best is yet to come. Once he has dropped his underwear he reveals a cute little butt with a hint of fluff about it, a nice change. Once the lesson has been taught he has to dress and go and do the chore he was set. A great debut for Lefteris. 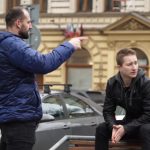 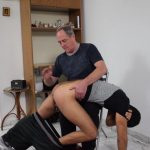